Hey blog lovers.  Here I am watching the IronMan World Championship and was feeling all proud of myself for running 7 miles yesterday.  I'm still proud but man, these people are crazy! In a good way, of course.  The extent of my exercise in Hawaii was when I went with my family after high school graduation and I snorkeled in the open ocean then body surfed on the beach.

Back to Savannah. This week was incredibly stressful for Hubs and me.  We have been looking at moving to various places around the US, and this past week was going to be decision week.  Unless something insanely crazy happens in the next couple weeks, we'll be staying in Savannah for at least another year.  We have big plans for our life and future family which we'd like to get started on soon, but we have a few other things to get in order before then!

Luckily, I was able to get some short runs in and boy, did I need them.  One was in the morning, which was seriously muggy and gross and the other was in the evening which was seriously muggy and gross.  Welcome to the South: where it's seriously muggy and gross. I felt great on both runs though.  I was really well hydrated and have kinda figured out my recovery situation which is a great step forward because at the beginning of the summer, I was getting really bad headaches after any run.  I quickly figured out this was due to running first thing in the morning after I hadn't had anything to drink in roughly 7-8 hours and apparently I'm a hot sleeper.  Now (if I have the time) I give myself at least an hour to hydrate before I head out and make sure I have at least 32 oz. of nuun after along with some high quality h2o.

My long run yesterday was fantastic.  I got up when the sun did and decided to bring JakeDog with me for the first two miles.  He's been missing out on extra exercise since it's been so hot so I thought it would be fun for him to feel the wind in his fur.  We had a great little run and he keeps me from going out too fast, therefore making the last miles excruciating.  I drank a little water when I dropped him off and headed out for another 2.5 miles before stopping at our place again to get some shotbloks and water.  At this point, I really didn't have a number in mind, I just knew I needed to fuel up just in case.  I headed up to Bonaventure and did a loop... it was starting to get really hot and my shirt had already come off so I decided to trek it back home.  I was .1 miles away from 7 miles when I got to the townhouse so I ran up and down the road one more time before calling it a morning.

So why the title? Well, I'd say based on the way my body feels, I'm back to 99.9% of where I was at before the great car debacle of May.  I feel really good and if it weren't for the humidity, I'd feel really great.

I have some busy couple of weeks coming up with weddings, parties, etc.  I've already planned out my runs though so I'm hoping no matter where I am, I can get a good run in.  I get to run in my college town in two weeks because my lovely sorority sister, Chicken Wing, is getting married to a hottie patottie (who is also the best man I can imagine her with!)  I love running in Lynchburg because it's just like home to me.  It's where I started my love for distance running and the beauty of Central Virginia is ridiculous.  And they have lots of wineries.

Hope everyone has a wonderful week! I have a cool surprise for later in the week! Stay tuned!
Posted by G-Wes at 1:30 PM No comments:

Sorry it's been so long, I know the 5 of you have been missing me terribly ;)  There have been a lot of things going on and I've really missed blogging, but I just couldn't do it.  At the end of May, I encountered a car... with my body.  I was out of running commission for about a month and getting back into the swing of things was hard. Especially with the Savannah heat.

I think I've made it back to normal though.  However normal marathon training in the Southern summer is.  Onto Peachtree.

Back in February, I saw that the lottery for this race was open and called up my good friend, Meg, who lives in Atlanta, to see if she wanted to do this with me.  Luckily, she was down for doing it and we both signed up, hoping we could easily get in and not have to deal with the drama of buying a number from someone else.  We found out the next week that we did in fact both get in and the training could start!

Fast forward 5 months.  Hubs, JakeDog and I road tripped it to the ATL and stayed at this awesome hotel called the Hotel Indigo.  We found it on a fluke (I was looking at the Ritz and the W) and I'm SO glad we did.  They were super dog friendly, the rooms were adorable and the staff was AWESOME.  I didn't really take any pictures of the inside, but if you go to the link, you'll be able to see a few from their website.  The rooms were small, the bathroom even smaller, but it was clean and comfortable.  That's what's important.

We had an extra day because I didn't want to stress out about packet pick-up so after taking JakeDog to the big city dog park, we ventured out to the Georgia World Congress Center to pick up my packet. 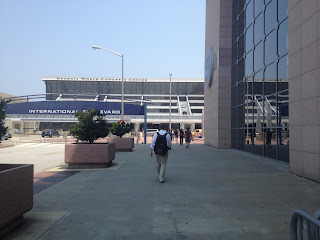 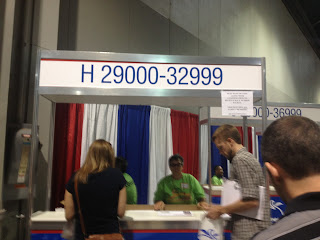 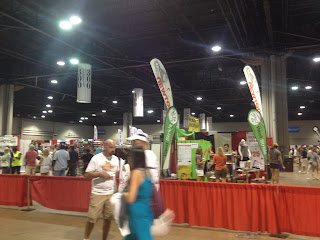 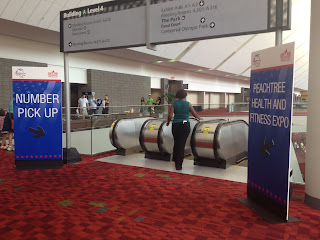 The expo was awesome and I picked up some nuun and a sparkly sweaty band.  It also happened to be right across the street from... 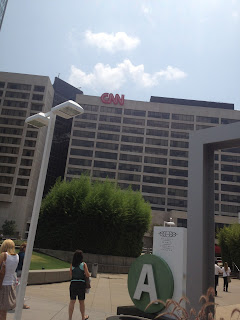 CNN headquarters!  We went into the building to cool off and we ended up deciding that a tour sounded like a good idea.  We had a great tour guide and while there were no celeb sightings, it was still really cool.  Here are a few pictures I was able to take while there: 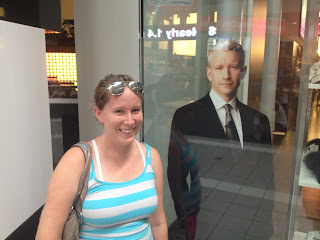 Me and my man Anderson 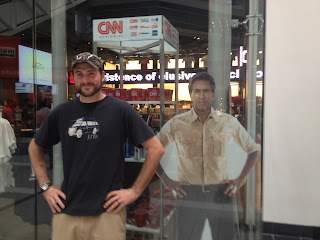 Hubs really likes Sanjay.  He wants to be just like him when he grows up. 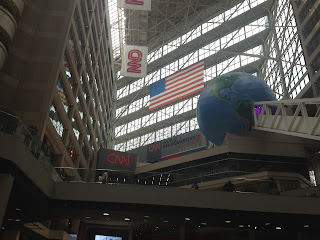 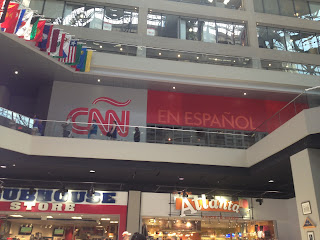 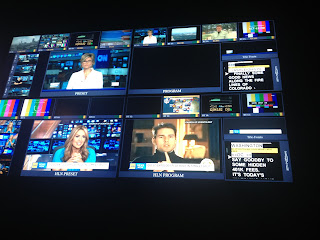 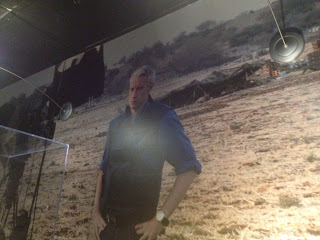 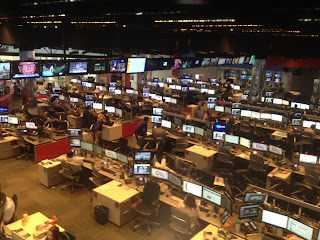 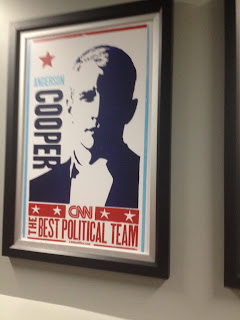 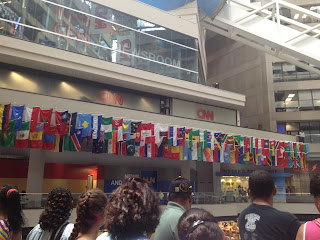 We met up with Meg that night and grabbed a drink and a bite to eat before hitting the sack.  Our wave didn't start til 9 so we were able to sleep in a bit which was really nice.  We hopped on the MARTA around 7:15 and packed ourselves in like sardines for the ride to Buckhead.  When we got to our wave, we hopped in line for the bathroom and sat in a parking lot til things started moving.  There were a lot of people there. Like 60,000. 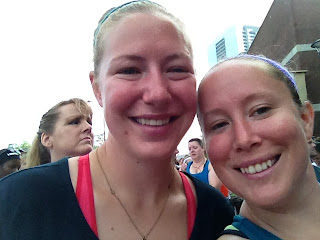 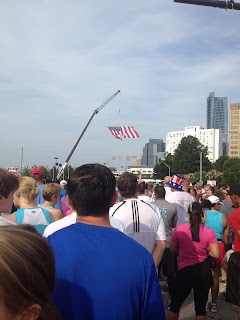 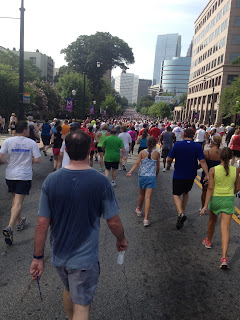 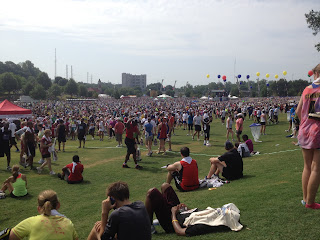 This was the aftermath... We were supposed to meet Hubs and JakeDog at this location, but it was crazy. 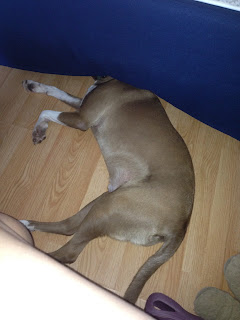 It was very tiring and hot for him. He couldn't even bear to show his head.

Overall, this race was exceptionally well run.  We had a complete blast running the 6.2, there was plenty of water, iced coffee, beer, smoothies, etc. on the course.  It was hot and humid, but I didn't really notice it because there were so many people and things to do along the course.  I was able to get ice relatively easily at the medical tent afterward and everyone who was working or volunteering was SO nice.

On the way home, Hubs and I were able to pick up some yummy lunch.  I love Panda Express and pretty much get it wherever there is one. 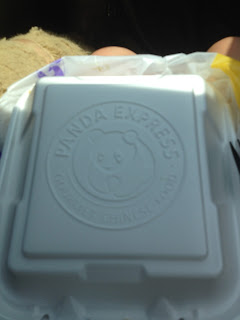 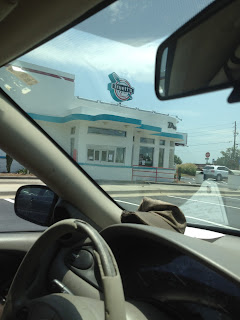 We made it back into Savannah with plenty of time to hang out and make plans for the 4th, but we were exhausted and decided to watch fireworks on TV.  I'm hoping that after this really long post, I'll be able to get back into the blog swing of things like I have with running.  Stay cool out there! Happy running.
Posted by G-Wes at 9:28 AM 2 comments: