That's How it Works! (And Doesn't)

Thank y'all so much for your love on FB and the blog.  I woke up this morning feeling like P Diddy extremely sore and a little hungover because I haven't had more than one glass of wine in like 4 months and last night I had.... more than one. We had some friends over for wine, tacos, and Spanish quinoa (we deal with hurricanes in high class here).

Spent a couple hours reminiscing about the olden days in college and my dad was astounded by the drama we had at our small liberal arts college/Greek life experience, since he went to Arizona State and then Notre Dame for law school, he had no idea! It was fun.

I thought today I'd chat about what I loved having with me on my marathon and what I could have done without.  I have quite a few friends running the Savannah Rock and Roll 1/2 and full marathon this weekend and while my experience is not the same as anyone else's, I know reading about these things helps trigger things you may not have thought about.  I've scoured marathon review blogs for like the past 2 months!

Nutrition
Nuun- This stuff is awesome. It's so much lighter than Gatorade or Powerade and while it doesn't have carbs, it's great for staying hydrated, especially if you're taking in your carbs through gels, chews, or anything else your training has shown effective.  I also took Gatorade at some of the water stations, but eventually I decided to mix it in with my water because it was just way too strong and I didn't want to upset my stomach! My favorite flavor is Strawberry Lemonade, but I tried the Grape at the MCM Expo and loved that too!
Shot Bloks- I had a really rough time with gels when I first started running longer distances.  I have a sensitivity to textures and they just didn't sit well in my stomach because I couldn't get over how gross they were to take in.  My friend Megan told me about Shot Bloks and I've never looked back.  They have plenty of variety and I haven't found one that has been too strong. My favorite is Tropical Punch.  It has a mild taste and caffeine for an added bang!
Camelbak Water bottle- I used to be the girl that would refuse to hold anything while running.  Then I ran in Savannah in the summer.  I have a hydration pak that I love, but it was so heavy I wanted to try something different.  When I found this water bottle, I was really hesitant.  I tend to get tense without hold anything, I thought it'd be worse, but even if I do get more tense, it's worth it. I took in over 120 ounces of fluids during the marathon and I was so thankful for my water bottle and those hot Marines who would fill me up when I needed it.

Footwear
Swiftwick Socks and Mizuno Wave Inspire 8- Happy feet mean a happy runner.  When I saw that Hurricane Sandy was set to make landfall some time around the big day, I ran right over to Fleet Feet Savannah and asked what I could do to make my feet happy if I was literally going to be running in a hurricane.  The awesome staff there told me about Swiftwick socks and how they work well enough to use during triathlons. I did a big no-no and wore them for the first time during the MCM but with the mixture of my awesome shoes and these socks, I have no black toenails, my feet stayed dry (even when I spilled some water on them accidently), and I will gush about them forever.
Random, but necessary

SpiBelt- Did another no-no and ran with a SPIBelt that my hubster bought for me the day before the race.  It was an awesome investment.  I was able to have my fuel available very easily and had my money and license securely in there.  This is important because two years ago when I ran the 10K here, I lost my license on the mall before the race.  I also left my phone on the Metro that year too.  Both were thankfully recovered, due to honest and amazing people, but it was scary there for awhile and so not worth the stress!

Skin Lube- I know it sounds weird, but since I'm allergic to Body Glide, it doesn't mean I can't chafe! I'm so glad I put this stuff in my SPIBelt, because I really needed it around mile 13.  Since my sports bra was relatively new, I wasn't aware of the rub spots yet so I got a few bad spots, but other than that my body is chafe free thanks to this stuff!

KinesioTape- I'm not sure if it's a comfort thing or if it really works, but I started wearing this stuff after doing rehab with hubby for my hamstring and back, and it felt so much better.  I tend to look at this stuff as a rehab tool instead of a game changer because I don't think one or two pieces of tape can really cure what ails you, but as long as you're doing exercises to strengthen those muscles that they are supporting, I'm all about it. 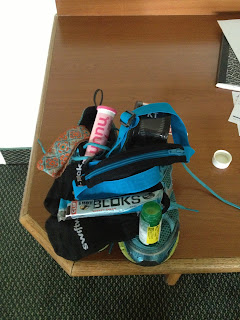 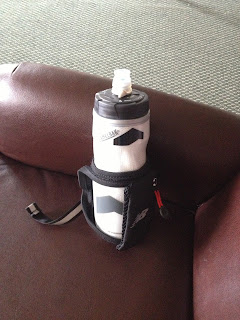 Things I'd do differently:

There are really only a few things I'd do differently.  First, I'd put skin lube basically everywhere my clothes would be touching my skin.  Even though it wasn't that bad, I know I could have saved myself a few screams in the shower afterward, had I done this.

I feel like this race went pretty much the best it could have.  I am still in awe of myself for running 26.2 miles without music or distraction, but I high fived about a hundred people, chatted with fellow runners, and made some great new friends because I wasn't in my own little world.  I also really noticed things around DC:  Watergate, the Kennedy Center, Arlington, Washington Monument, the Capital, the Pentagon, the Lincoln Memorial... these are all things I've seen before a million and one times, but running by them was different.  Going on the subject of other cool shirts I saw, there was a quote on one that said, "The preparation is the journey, the marathon is the victory lap." And again, this just touched me so much and changed how I looked at things. I took my victory lap with the best preparation I had and can't believe it's over!